Kuninji is a small village, seven kilometers north to Ramapuram which is well known in Kerala history on account of well known persons like Ramapurathu warrier , Lalithambika Antharjanam and great personalities in church history such as Paremmakkal Thoma Kathanar  and Blessed Kunjachan. Kuninji is in Idukki District and its border touches Kottayam and Ernakulam districts. Kuninji is in purapuzha panchayat and its border touches Ramapuram, Veliyannoor, Palakuzha and Karimkunnam panchayats. This tiny village is surrounded by tall green hills on all sides and the panoramic scenery is very beautiful and attractive to tourists. The long view from the top stations of greenery hills to Cochin, the queen of Arabian sea is an exclusive awe inspiring experience to the nature lovers.

Even from the distant past centuries people migrated settled in Kuninji. Due to epidemics and other natural calamities people devastated from this region and it became forest.  In 19th and 20th centuries people from Ramapuram, Kuravilangad, Athirampuzha and Palai again migrated and settled here.

Majority of the settlers are from catholic christian community.They  depended upon Ramapuram and Neeranthanam churches for their spiritual needs. They had the strong ambition for a church here to fulfill their sacramental life. They sent a memorandum to the vicar apostolic, Bishop mar Thoma Kurialasseril of Changanachery. The memorandum of the people was carried to Changanachery on foot by their elders like Vattackattu Mathai Ouseph, Esthappan Kuruvila Kulakkat, Mathai Varkey Vattakkatt, Ulahannan Kochumankunnel. Kochuparambil Augusthy offered to give land for the proposed church at the centre of Kuninji. He gave one acre of land free of cost and six acres of land for a price for the church.

The bishop of changanachery accepted memorandum favourably and orders were given to Fr John  Arancheril, then vicar of neeranthanam church for further action.

As per order No.990 of the vicar Apostolic of Changanachery dated 20 July 1918 permission was given for the establishment of a church at kuninji as a filial church of Neeranthanam church. Accordingly the presbitary was constructed and application was submitted to the government for the permission of the construction of the church at Kuninji. Ouseph Mathai Vattackatt and Esthappan Kuruvila Kulakatt were elected as the first trustees of the proposed parish. With the permission of the bishop ,  the foundation stone of the new church was laid by Fr. John Arancheril on 27th January 1919 and the statue of St. Antony was blessed and in installed on the same day.

During the pastoral visit of Mar Thomas Kurialassery to Neeranthanam church Kuninji parish was raised to the status of independend parish on 16/01/1920 and Fr. John Arancheril was appointed the first vicar of the Kuninji parish.Permission was granted for the celebration of the feast of St. Sebastian on every 27th of January, the day on which the foundation stone of the church was laid. Permission was granted also for the celebration of the feast of St. Antony, patron of the parish on the second sunday of June every year, which falls near to the feast day of St. Antony, 13th June. 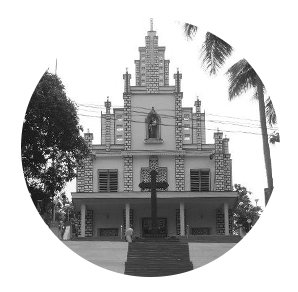 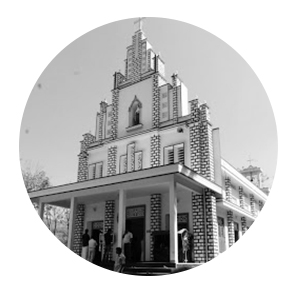 The present church was constructed as the Golden Jubilee Memorial , when Rev.Fr. George Mulanjananiyil was vicar during 1963-1970. It was the result of very hard labour of the people and the vicar and it was consecrated by Mar Mathew Pothanamuzhy on 31/01/1971

The church has been playing a leadership role in bringing about timely development in Kuninji. Ramapuram – Marika road was made in 1927. In 1961 Kuninji – Karimkunnam  road was made in 1963. It was because land was offered by the church the Government Homoeo Dispensary was established in kuninji in 1974. In 1976 the church offered land to purapuzha panchayat to start a market in kuninji. Electricity was brought to kuninji through the efforts of the church. The library and the post-office   were established here by housing there in the church campus.

A unit of the adoration convent was established in Kuninji in 1961. The reverend sisters render a great service for the spiritual formation of children in teaching and various spiritual services in the parish.

Ward prayer groups have been regularly functioning in the parish from 1991 when Rev.Fr Joseph parayil was the vicar. At first there were 5 wards and 21 prayer groups of families. At present there are 12 wards and 13 prayer groups. Each ward has a leader and five assistant leaders to organise monthly prayer meetings and to carry out various services under the direction of the parish priest.

Religious education of children is an important function of the church. Religious instruction is important to the children from LKG, UKG, std 1 to std 12 every sunday after the holy mass as per the schedules provided by the diocese.

School education of children has been of great importance at all times. In 1948 the present St.Antony’s School was established with Government permission. At first the teachers were paid salary from the church funds. Later the school was admitted to government grants. But the grants were meagre. Now the is running as aided school.

The church expects every christian to participate in the mission of the church in one way or another as is possible according to each one’s life situation. Mission League, Yuva Deepthi, Mathru Deepthi, Vincent De Paul Society, Sunday School, Family Apostolate play a great role in the development of the sacramental life of the parishners,  Friends of St.Antonys high school, started in 2015 is great help in the academic and other developments of the school. Deepika Friends Club is a social development movement as a part of communal conscience.

The Parish is going to celebrate the centenary of the church in 2019. As a preparation the church has developed the church surroundings, the cemetery has been developed with tombs, a cemetery chapel, parking area etc. The centenary memorial will be the parish catechetical centre which is now under construction.

Order for starting a church at Kuninji

Laying of the foundation stone for the new church.

Celebration of the parish feast for the first time.

Order for celebrating Baptism at Kuninji

Order for blessing marriage at Kuninji

Kuninji is raised to the status of independent parish.

Order for the celebration of St. Sebastian’s feast on 27 th of January, on the day foundation stone laid for the church.

Order for celebration of the feast of St.Antonys feast on the second Sunday of June.

Kuninji parish came under Bharananganam forane of Changanassery Diocese and there after became the part of Ramapuram Forane.

St. George Chapel at Kuninji was blessed as a silver jubilee memorial of the parish.

Mar Mathew Pothanamuzhi laid the foundation stone for the new church in the presence of Fr. Vicar Fr. George Mulanjanany.

Mar Mathew Pothanamuzhi consecrated the new church as a monument of the golden Jubilee memorial of the parish.

St. Sebastian Chapel at Kodikuthi was built by Fr. Joseph Perumbany and consecreted feast of St. Sebastian is celebrated every year.

St. George Chapel was rebuilt by Fr. Sebastian Kadambanattu as a memmorial of the platinum jubilee of the parish and consecrated by Mar Joseph Pallickaparambil.

Conducted parish assembly for five year planning of the parish for the first time.

He blessed the miraculous well “Anugraha Neerurava of st. Antony”.

Celebration of the “Year of Religious”. All the religious from the parish gathered on this occasion and a memento was given to them all.

Fountation stone for the Centenary memorial Catechetical Centre was blessed and laid by Fr. George pottackal, vicar in the presence of the priests from the parish.

Website of the parish was inaugurated by Fr. George Pottackal, vicar.

The name of the Church Kuninji is changed to “Paduagiri Palli”.

First Tuesday programme started in relation with the centenary celebration of the church.